This blog will soon return to its usual programming but for the past week I have been much more active in meatspace.

For K-Punk, in this way, at that time, just felt like sharing an idea: the idea of a party. So much of the energy that Mark’s death had occasioned was spent on London dance floors in 2017 and this continued to feel like the best way to honour his memory. Something similar had to happen following Kodwo’s leture, and so myself and lēves set about making the idea a reality.

In the lead up to the day, I was a mess of stress and anxiety. It is very difficult to organise a party in a week. To be honest, the party that we had planned didn’t happen – it all fell apart – but something else fell together in its place and that was entirely down to the people who were there and their energy and love. This was palpable throughout the whole evening with Kodwo filling out three lecture halls on campus – two others projecting a live stream of the event – and with countless others tuning in worldwide.

Kodwo’s lecture spoke to this well – better than well; better than anyone could have done except maybe for Mark himself. I won’t do the lecture a disservice in summarising it from memory here (and it will hopefully be on YouTube soon enough) but I will share the snatches of phrases I scribbled in my notebook.

Kodwo spoke of “gatherting people into gatherings”, “making movements”, “consenting not to be a single being”, “affective proximity”, “being alert to the temporality of theory”, “shifting grounds”, “drastically advanced regressions”, “turbulence”…

He noted how people who approach thought through and from music have an insight into the “time signature” of the current moment, as Mark did and as Kodwo most certainly does. (I kept thinking last night how Kodwo can often feel out of time in his analyses, but in the best way – like some sort of Time Lord gazing down with omnipotence on the entangled time crises below.)

One of the projects that Kodwo and Mark had planned, that Kodwo and others have since talked about at length, became a focus for the second half of the lecture: a book called Kanye Theory.

“An ultralight beam connects the earth to an Outside through a mutant gospel”, he says at one point, in reference to the opening song of Kanye West’s The Life of Pablo. “Gospel is a summoning of forces from outside to aid endangered persons.”

The first performance of For K-Punk became the most fitting listening session in light of this. Without knowing the content of Kodwo’s lecture, we had planned to play The Life of Pablo in full (at the suggestion of Ayesha Hameed, because it was a recent album that Mark had really liked) and whilst the Kanye-adverse bar owner didn’t let this happen quite as intended we nonetheless heard most of it and the atmosphere of the night was set.

Dancing in a circle with friends, strangers, Kodwo busting moves like there was no tomorrow, was perhaps the happiest I have been in months and I will long remember how taken aback by this I was.

The last six months were immediately struck in relief. I have missed dancing and I have missed our howling communities screaming along to whatever summons has been hurled at us from the DJ booth.

What Kodwo meant by Mark’s capacity to make and midwife movements was so clear then. He is still doing it from beyond the grave. This must continue, and it might… The venue were very impressed with the turn out.

How last night could be repeated, I do not know, but I have faith in the people around here who I believe would rally around a night that continues explicitly to channel the memory of K-Punk.

In much the same way that Kode9’s Ø nights at Corsica Studios have become a gathering point for gatherings, there is certainly space and desire for more opportunities to be together with music.

A thousand thanks must go to Adam Harper and No Signal Sound for playing the first few hours of the night, and a thousand apologies to those who stayed with me as I tried to get to grips with CDJs for the first time. (I really miss my records).

When has a 6am walk home ever been this joyful? 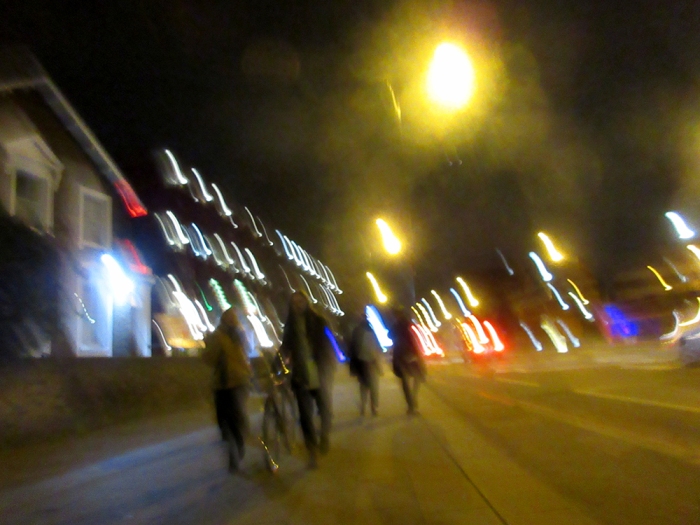 If you’d like to support this blog and its various projects, please consider paying a small subscription fee here.

It all genuinely helps keep things up and running, so thank you!